Last year I got busy dealing with other things other than bead making until just before christmas.

But now I'm back on the bead making trail - and have loads of ideas to try out........so watch this space.

Ever since I started lampworking I have made my own bead release - and I have been very happy with it.  I have drawn on my understanding of clay and glaze technologly from my days as a potter and made a few tweeks to the recipe and believe that I have now got it to be almost as good as I can.

So I took a deep breath......and offered up to the lampworking world - via the Frit Happens Forum.  A whole bunch of lampworkers agreed to test samples and feedback their thoughts on my product.  A largely they were happy with it.

Now I am selling it......through my Etsy shop.  It is available in Taster Pots, 250 ml and 500 ml jars.  So far I have had quite a few sales and I am hoping this will build into a steady stream of sales over the next few months.

If you want to take a look click on the link to my shop - over there on the right.
Posted by Unknown at 19:42 No comments:

I just love Etsy Treasuries.  I love to see what other people choose to put in them - and making them is just like curating your own personal exhibition.

I have made 3 treasuries so far - and have been lucky enough to be featured in quite a few more.

They are quite simple to make.  If you have an Etsy account just sign in and click on the 'Buy' button.  The select the Shopping with Teasuries.  You will see a tab on the right that you click that will let you start to create your own treasury.  Of course you can keep it all for yourself - but the fun is in the sharing.

If you don't include your own work, and you can get enough other folks to look at it, click on the the thumbnails and leave a comment then you may even get through to being published by Esty themselves.  How does that work - you score points for each of the above actions - the more points the better the chance.

But even if you do include your own work - you get the opportunity to spread the things you like to a biger audience.

Go take a look and give it a go.

Getting out of a rut challenge

I am a fully paid up member of the Frit Happens Forum, spending more time on the site that is good for me I suspect.  But it is a huge source of inspiration and an extremely friendly place.
Anyway a challenge was set - a partner sends you a picture and you use the colours in that picture as a source of inspiration for a bead or a set of beads.
Well this is the picture I recieved from my sending partner. 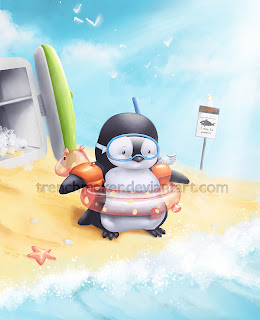 And I got my thinking cap on.
Several attempts later I came up with these. 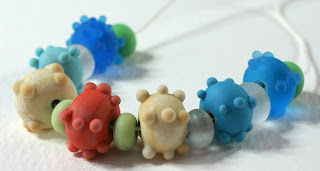 My first attempts were too complicated, trying to get too much onto one bead and getting too tied up in the image and not just the colours.
So I decided to step back and just think what are the colours - shades of blue, white, sable, green, grey and black.
Thought that getting them all in would be overdoing it a bit, so I decided to keep to the ones that have the biggest influence on the image or took up the most amount of space in the image.
That took it to the blues of the sky, the sable of the beach, the whites in the clouds and surf and a bit of green and coral/pink in the details.
After playing around with rods of glass in these colours I settled on dark and light transparent turquoise and opaque turquoise and sky blue.  Dark ivory for the sable, and a couple of shades of green.  The darker green is Effetre Pea Green, but I don't know what the other is as its from an unlabelled rod.  I thought about using a white, but was worried it would be too white, if you get what I mean.  So I went for Effetre clear and etched it as it gives a better feel of surf/sea foam.  Then some coral, just a bit.
I don't usually use these blues, and rarely use coral.  I do, however use a lot of ivory.  Greens almost never.
I also decided to use the excerise to get to grips with dot placement - something I keep promising myself to concentrate on but always seem to avoid and just do dots now and again.
I also decided to keep the design really simple - but to try and link all the colours together by repeating the same design elements - donuts and raised dots.
When the beads were done I lined them all up and tried various combinations but still something wasn't right.  Q - What was it?
A - they were too shiney.
So out came the etching solution - and hey presto!
I am really pleased with the result and most certainly will be returning to these colours and designs again.  I have often thought about using the coral, but had not thought of teaming it up with the greens - I really like this combination.  Just need to figure out what glass it is now.
Oh! and I just had to make one of these as well. 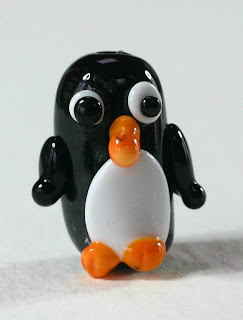 He's not a  PPPPP..Perfect Penguin - but I love him just the same.
So if you are getting stuck in a rut - get someone to send you a picture and challenge yourself.
Posted by Unknown at 22:19 No comments:

I have been busy photographing, editing and listing new beads in my Etsy shop.  It never ceases to amaze me just how long a process this always turns out to be.  I am sure it's quicker to make a bead than get it ready for listing.
Anyway - rather than bore you with loads of photos I shall tempt you with one 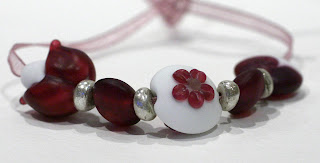 This a a lovely set I made recently.  Nestling among the lentils and the Dicentra flower bead are some of my silvered ceramic beads.  I made these last summer and have been testing for 'tarnishability'.  They have been left exposed to the air for months now and not a hint of tarnish.  I think I will be making some more pretty soon.
This is the first time I have listed a set like this.  I have done a couple of smaller sets with beads of the same design - but I get so bored with making the same bead over and over again.  I set my mind to making say 9, then after 3 or 4 I am tempted to revised than down to 7 and sometimes I stop at 5!
So I decided that themed sets are probably the way for me to go.
Anyway - feel free to mosey on over to the Etsy store to take a look at my wares - the link is too the right.
Posted by Unknown at 19:18 No comments:

I have now re-opened my Etsy shop - and started listing some new beads.  There is a link to the shop on the right of the page.
Posted by Unknown at 17:28 No comments:

I have been a busy bee - making lots of new beads, experimenting with new colours and techniques.  Don't worry I won't chuck it all at you at once.
Let's start off with a few that I am particularly proud off.
I have been working on free formed hearts - that is heart shaped beads that are made without the use of a bead press.  It has taken a while to get to grips with the technique and make a nice heart shape. The technique I have been practising has the hole going top to bottom, so the bead is made on the mandrel.
This really sharpens up the molten glass control skills - getting the glass to move into the right amount of droop, and not ruining the shape of the bottom end of the heart, while adding some decoration.  I have decided to keep the additions simple so as not to detract from the shape of the bead. 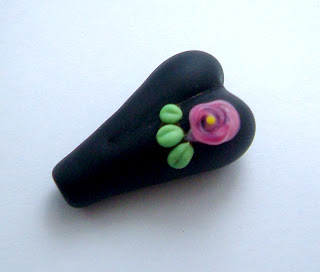 ﻿The first one is standard Effetre black with a little Rubino Ora and white rose.  I made a stringer by encasing some standard Effetre white with the Rubino and twirled it onto the bead.  There are little green dots for the leaves and a yellow centre.  I have etched the bead in Etchall. 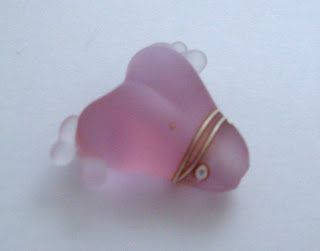 This one is Effetre Rossato - the first time I have used this glass and it's lovely.  I have added some standard clear glass wings and a little coil of fine silver. Then etched it. 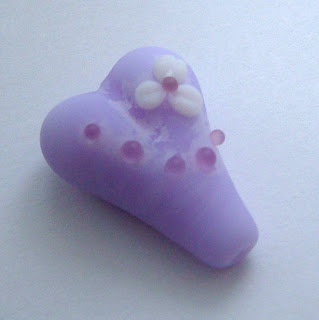 And finally CIM Heffalump with Effetre white and dark purple.  Again etched.
I decided to acid etch rather than tumble etching so that the whole bead was treated.  Tumble etching does not get into the nooks and crannies.  I was also worried that the tumbling would knock the raised decoration off.
Overall I am pretty pleased with the result.  The photography is a bit pants - sorry about that - but the light is really bad here today and I couldn't wait to get the post up.  I will redo them next week and upload them to my Flickr account.  Then I will probably list these in my Etsy store when it re-opens in a couple of weeks.
Posted by Unknown at 17:52 No comments:

Well - I didn't realise it had been this long - but I haven't updated my blog since September. It's not that I haven't had anything to say or beads to share - but it just doesn't seem to have happend.
I did promise myself to blog more regularly as a New Year Resolution - but it's taken me a month to get started.
Well I have been making beads - lampwork, but took a break when it got just too damned cold in December. 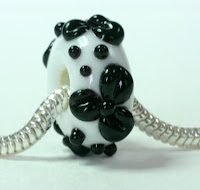 I invested in a big hole mandrel - 5mm and made some big hole beads as christmas gifts. They take a fair bit of patience to make. The glass melting capabilities of my hot head torch are challenged - but we got there with a few mistakes along the way. Some are a bit wobbly - but I think I shall call this an intrinsic quirkyness.
I have taken part in a bead swap on the Frit Happens Forum and got a lovely little lampwork bear clutching a bunch of flowers. As it was my mum's birthday a couple of weeks ago and she loves bears I made it into a Fibula for her. Using a couple of tibetan silver beads, a length of 1.2mm sterling silver wire - and hey presto! The little bear was made by Pam at www.mapleglass.co.uk 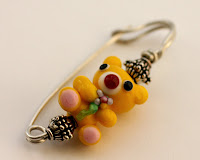 This is the first fibula I have made that I have not scrapped, and have become so inspired that I made another with some of my own beads. These are Effetre Ink Blue trailed with fine silver wire. Not keeping it though. I have offered up as a prize in a PIF competition on the Frit Happens Forum. Next one will be a keeper though.

Have loads of plans for new beads - lampwork and clay - so will be back soon.
Posted by Unknown at 23:00 2 comments:

Email ThisBlogThis!Share to TwitterShare to FacebookShare to Pinterest
Older Posts Home
Subscribe to: Posts (Atom)
Get this widget at roytanck.com